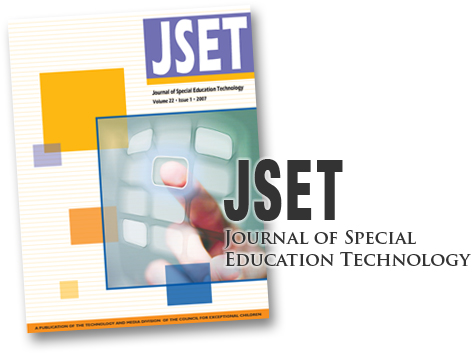 Technology Use by Students with Intellectual Disabilities: An Overview
ARTICLE

The U.S. Department of Education report "Computer and Internet Use by Children and Adolescents" (National Center on Educational Statistics, 2001) illustrated the degree to which technology use, particularly electronic and information technologies like computers and the Internet, has become a pervasive part of the educational process. This study found: (1) About 90% of children and adolescents ages 5-17 (47 million) use computers and about 59% (31 million) use the Internet. (2) About three-quarters of 5-year-olds use computers, and over 90% of teens (ages 13-17) do so. About 25% of 5-year-olds use the Internet, and this number rises to over 50% by age 9 and to at least 75% by ages 15-17. (3) More children and adolescents use computers at school (81%) than at home (65%). (NCES, 2001, p. iv). Unfortunately, the National Center on Educational Statistics (NCES) also found that 5 to 17-year-olds without a disability were significantly more likely to use computers and the Internet than their peers with disabilities. Furthermore, even among students with disabilities it is likely that students with intellectual disabilities are less likely to have access to and benefit from technology. The reasons for this are varied, certainly, but essentially there have been few efforts to ensure that computers and other technology devices are cognitively accessible. The National Council on Disability (1996) noted: "...other than trying to make computers generally easier to use, no specific features targeted at users with cognitive/language impairments are known to be part of current computer design, nor have any been included in any of the design guidelines that would not have been included in the set of guidelines for making products easier to use by this population." This article overviews technology use by students with intellectual disabilities, with a particular focus on electronic and information technologies, such as computers, that are widely used in education. Issues pertaining to barriers to such use for this population are also examined.